Everything started with Nadja and Paulo who moved to the island of Cyprus in August 2018.

What initially seemed as a "paradise for cats" soon revealed its real face and the tragedy behind the story of the cats of cyprus and their suffering became evident.

As soon as you see the first sick cat in Nicosia's park or find the first litter of starving little kittens that were abandoned by their mother, cold and alone and eaten alive by parasites there simply is no way to not help.

That's how the occasional feeding of strays turned into a daily ritual. We started bringing the first sick cat to the vet and many more should follow until a visit at the vet clinic became as much of a daily ritual as the habitual morning coffee. The amounts of food that we feed the cats on a day to day basis exploded but we noticed that, despite all this, the cats weren't doing better.

That's when we did research on how to helpthe strays better and stumbled upon the term "TNVR" which stands for Trap-Neuter-Vaccinate-Release. TNVR is the most effective and humane way to break the vicious cycle of mass reproduction and with that end the suffering and death of countless newborn kittens.

Whenever we could afford it we would trap a cat and bring it to the vet to undergo the TNVR programme and only a few months after we had brought the first cat to be spayed we noticed a decrease of newborn kittens in the two cat colonies that we take care of.

It was around the same time that we started re-homing our first cats as there are many friendly and well socialised cats living in the colonies.

Click here to find out more about the TNVR programme.

We take care of two large cat colonies and visit the multiple times a day to check on them and provide them with food and water. We built cat houses so the cats have shelter from the elements.

All cats in our stations are well looked after. Sick cats/kittens will immediately be brought to our local veterinarian and all of our cats are vaccinated, frequently de-wormed and de-flead.

Many cats that live in our stations are friendly and well socialised. For those, we constantly look for suitable forever homes .

"Cat Stations in Nicosia" in the local newspaper

The biggest newspaper in Cyprus, Cyprus Mail, kindly published a portrait about Nadja and her work with the cats.

"Cat Stations in Nicosia" in the local TV-programme

"Κοίτα με στα μάτια" (english: "Look me in the eyes"), is a daily airing local TV-show that features all sorts of short stories with and about animals.

The TV-show team visited us in December 2020.

"It's not just an animal. It's a heart that beats, a soul that feels and a life that wants to live." - Sylvia Rasslof

May we introduce ourselves?

Our small team of dedicated volunteers

Directly involved with the cats 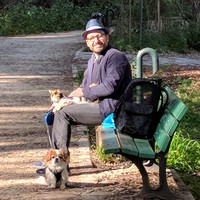 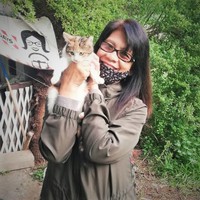 Directly involved with the cats

Representative for all of the stray cats of our stations, food tester