07/02/2020
Panda has been with us for a long time now. We initially tried to re-home him together with his brother Sisco but couldn't let the opportunity pass when we found someone interested in Sisco but not in Panda. So unfortunately we had to separate the siblings and are still looking for Panda's loving forever home. The fact that Panda is FIV positive (Feline Immunodeficiency Virus, similar to HIV in humans) positive certainly doesn't make things easier.

Panda was born in August 2019. His childhood wasn't exactly a walk in the park as he had a bad infestation of parasites that caused him severe hair loss on his back as well as persistent diarrhoea. Treatment was long and involved several injections, pills and ointment. In the end, Panda overcame the infestations and recovered completely.

Despite his rough kittenhood Panda never lost his curiosity and funny way. He endured the many vet visits without any form of complaint and grew up a a confident and strong cat who mainly keeps himself in the background but stands up for what's important to him.

It came as a shock when he got tested positive for FIV in May 2021. FIV is transmitted solemnly through body fluids (i. e. deep bites from an infected cat to a healthy cat, mating or transmission to kittens while still in the womb of the FIV positive mother cat.). Since his brother Sisco tested negative we can only assume that Panda caught the virus in a fight with another male cat, most likely a male.

He shows no signs of illness and in many cases, FIV lingers in the body but actually never leads to an outbreak of the disease. FIV cats can live long and healthy lives, especially when being kept indoors so as to not get the cat exposed to pathogens outside, which their body cannot fight off the way an FIV-negative cat can.

Because of the many treatments he had to endure during kittenhood, he got used to human's handling him from a very young age on so he's nothing but gentle with humans. That certainly makes things easier if he were to require vet treatment because of an infection.

Panda is a lovely family addition. Kids are fine as he is a very patient cat.

FIV positive cat can be kept together with other cats, even when the others are FIV negative. Panda is a friendly, non-aggressive cat. He protects his boundaries by hissing but would never initiate a fight. Because of that Panda opposes no risk to healthy cats, especially if the existing cat(s) are not overly dominant. 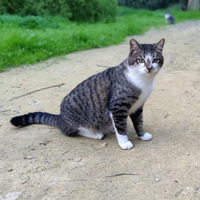 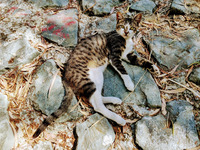 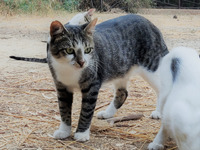 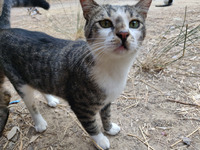