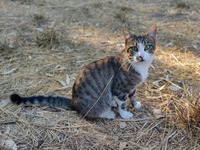 Sisco made it! He had lived for an entire year in Nicoisa's parc before a lovely familiy in Belgium adopted him.

Despite Corona the adoption went smoothly and Sisco adapted to his new home already a couple of days after his big trip.

Sisco has a calm character and things were not always easy for him: the other cats often managed to chase him away from the feeding areas, so we had to feed him separately. Soon he connected our presence with food and enjoyed our company more and more. He grew into a friendly and cuddly cat.

We were sure that he would be happy in a home where he would get a lot of attention.

Sisco as a kitten

Katerina, one of our volunteers, found a loving family in Belgium for our sensitive Sisco. As she knew the family personally, a home check wasn't necessary. The few formalities were soon completed and Katerina travelled with Sisco to Belgium at the beginning of November 2020. The trip went over two days as there were no direct flights to Brussels due to the pandemic.

Sisco and Katerina had to spend a night in Athens before their trip continued the next day. Our hero coped with all these challenges very successfully.

When he finally arrived at his new home, Sisco needed a small break - a bit of time for himself. But this break didn't last long and only a few hours later he started exploring his new home and presenting himself to his new family.

After a week the ice was completely broken and we received photos of a cuddly Sisco lying on his back and enjoying the undivided attention of his humans. He is completely integrated into his new family, who is totally happy.

Big thanks to Katerina for Sisco's safe transport and of course also to Sisco's new family, Milena & Co.